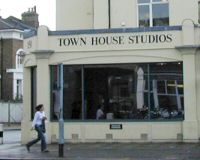 One of Britain's most famous recording studios.

Description: It was here in 1997 that Elton John needed somewhere to record his tribute to Diana, Princess of Wales he came to Town Houses Studio 1 to record the version of Candle In The Wind, produced by George Martin, on the afternoon of her funeral. The session on that September afternoon, as is now part of music legend, went on to spawn the biggest, and fastest, selling single of all time.

Artists including Queen, Bob Dylan, Blur, Def Leppard, Frank Zappa, The Jam, Oasis, Placebo, Robbie Williams, Suede and Tina Turner among many, many others have all burned the midnight oil there.

The Town Houses Studio 2 was even immortalised on celluloid when it appeared in Bob Dylans Hearts Of Fire film.

Sweet were the first artists to record here.

Queens Roger Taylor recalls the accommodating nature of its staff. I remember when we were there, Freddy [Mercury] insisted the ladies loo be widened to allow for the ample proportions of Monserrat Caballe,
known in Spain as la stupenda, he says.