The World's First Ever Cashpoint 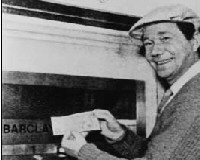 The world's first ever cashpoint was installed here in 1967

Description: The world's first ATM was installed in a branch of Barclays in Enfield, north London, 40 years ago this week.

Reg Varney, from the television series On the Buses, was the first to withdraw cash.

Inspiration had struck Mr Shepherd-Barron, now 82, while he was in the bath.

It struck me there must be a way I could get my own money, anywhere in the world or the UK. I hit upon the idea of a chocolate bar dispenser, but replacing chocolate with cash.

Barclays was convinced immediately. Over a pink gin, the then chief executive signed a hurried contract with Mr Shepherd-Barron, who at the time worked for the printing firm De La Rue.

Plastic cards had not been invented, so Mr Shepherd-Barron's machine used cheques that were impregnated with carbon 14, a mildly radioactive substance.

The machine detected it, then matched the cheque against a Pin number.

However, Mr Shepherd-Barron denies there were any health concerns: I later worked out you would have to eat 136,000 such cheques for it to have any effect on you.

The machine paid out a maximum of Â£10 a time.