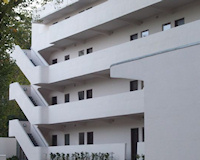 Description: These groundbreaking flats were designed by Isokon architects, Wells Coates and Jack Pritchard, and were opened in 1934. The flats were intended as a social and architectural experiment in minimalist modern urban living.

Designed with special reference to the circumstances of the bachelor or young married professional or businessperson, the Lawn Road flats were the first real Modernist development of their type to be built in the country. Most of the 30 apartments were derived from Le Corbusier's distinctly unglamorous concept of the minimum dwelling: a utilitarian solution to the problem of mass housing which presupposed that the masses would take kindly to living like Cistercian monks.

They did not, but a young man-about-town might. Coates used sliding internal partitions and ingenious built-in storage to maximise space and functional efficiency: the proverbial machine for living in.

Residents could also make use of laundry facilities and the communal restaurant (the 'Isobar') which was installed later.

Agatha Christie, Marcel Breuer, Laszlo Moholy-Nagy, Walter Gropius (founder of the Bauhaus), and Henry Moore have all once taken up residency here.

I believe the building was left to slowly deteriorate after WW2 and was only recently been fully restored.

An English Heritage blue plaque was unveiled today on 9th July 2018 recognising their significant contribution to the fields of art, architecture and design, said Kate Mavor, the then chief executive of English Heritage.