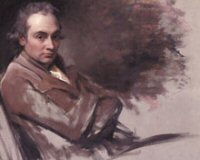 The house of George Romney when he first moved to Hampstead

Description: George Romney (1734-1802) was a noted English portrait painter. He was born on Boxing Day 1734 in Dalton-in-Furness, Lancashire, and apprenticed to his father as a cabinet-maker. In 1755 he went to Kendal to learn painting from a Cumberland artist by the name of Christopher Steele, and within two years was becoming well-known as a portraitist.

He fell ill during his apprenticeship and was nursed back to health by Mary Abbott, daughter of his landlady.

In 1762, by which time he was married with two children, he went to London, and saw early success with a painting, The Death of General Wolfe which won a prize from the Royal Society of Arts. Romney soon had a thriving portrait business in Long Acre.

He was the first (of many) artists to move to Hampstead permanently, however the move was not a success because Romney had no interest in landscapes and had moved too far from London to maintain his city-based portrait clients.

Bridge That Curls Up Into a Ball», 15.km