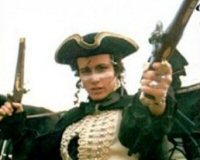 This is where cowboy Adam Ant waved his gun around.

Description: The Princess of Wales is the pub where on 12 January 2002 former rock legend Adam Ant threatended cheeky drinkers.

Apparently pub customers started humming the theme from the spaghetti western The Good, The Bad and The Ugly, when he walked in wearing a combat jacket and matching flat cap.

After hearing the jokes he left the pub and returned by throwing a car alternator threw the pub window. On those inside leaving the pub they found Ant (real name Stuart Goddard) waving a pistol around and threatened to shoot them.

No-one was hurt but Judge Jeremy Roberts said at an earlier hearing that doctors believed Goddard had been in a hyper-manic state.

After his arrest Goddard had been sectioned under the Mental Health Act in the Alice Ward of the Royal Free Hospital, in north London.