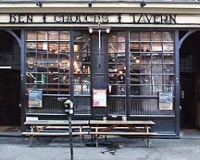 Once a Gothic pub steeped in Vampire History

Description: Once one of the eeriest gothic pubs in London, what marked the 'Ben Crouches Tavern' out from the other pubs in the chain was the London Vampire Group Meetings on the 2nd Thursday of every month.

The Ben Crouches Tavern was named after an infamous London graverobber of the early 1800's, who was the son of a hospital caretaker.

Alas now it is called the 'Adam and Eve' public house and they dont cater for vampires any more!

But it was good once!

2» The London Vampire Group now meet at the Elixir Bar at 162 Eversholt Street.This is the road on the right hand side of Euston Station.The meeting is on the first Thursday of the month. (Dave Evans)
Posted by Dave Evans on 2011-07-04
1» Looking at running the ben crouch tavern. Looking for as much information as possible. Regards John (John Quinlan)
Posted by John Quinlan on 2009-01-19

Rule Brittania in The Dove», 4.6km