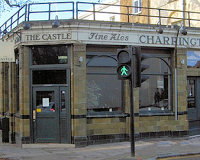 The Rough Trade pub where Keith Allen got his penis bitten.

Description: Formerly the Warwick Castle, this is a pub steeped in rock history from the seventies onwards with The Clash and Joe Strummer, Transvision Vamp, PIL, plus many West Indian influences. Mostly it stemmed from being the local for Rough Trade who were next door.

In the late 90s, the front door of the Transvision Vamp drummers former Westbourne Park Road abode, opposite the Warwick, took the starring role in Notting Hill the movie.

Keith Allen tells a story of one of his infamous fights in this pub when someone bit his penis and he needed stitches in hospital - ouch!