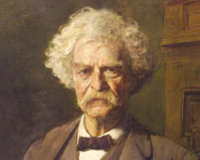 Description: This is the house where Mark Twain and his family lived in through 1896/7, where he worked on his last travel book 'Following The Equator'.

The death of his daughter from meningitis had a profound effect on him leaving the great author sad and embittered. He was scathing about the work produced by Chelsea artists. He likened a painting by Turner to a tortoiseshell cat floundering on a plate of tomatoes.

In 1912 Albert Bigelow Paine published a biography of the recently deceased Twain, based on Twains oral reminiscences. By this point his straightforward factual remark to the Journal correspondent had taken on a sardonic tone. Paine wrote: A reporter ferreted him out and appeared at Ted-worth Square with cabled instructions from his paper . His orders read:

Clemens smiled grimly as he handed back the cable.

You dont need as much as that, he said. Just say the report of my death has been grossly exaggerated.

And in that form, with minor differences in wording, the anecdote has been passed down ever since. 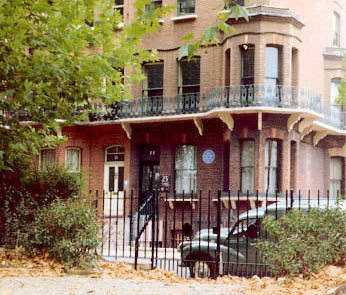