The Field of Forty Footsteps 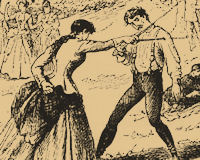 The site of the bloody duel between two brothers over a girl.

Description: The area of land that existed here before the square was built upon it was named the Field of Forty Footsteps after a legendary duel that took place here.

Two brothers fought and killed each other here over for the love of a girl, who watched passively from the bank of a pond nearby. Their lengthy exertions back and forth over soft ground was visible for many years to come, probably due to a dry spell! Legend has it that each step they took during battle killed the grass, and it never grew back.

The only building here at the time was was Montague House (now part of the British Museum). This area was then known as Long Fields and then Southampton Fields.

According to T F Thiselton Dyer (Strange Pages from Family Papers), the footprints were located 'about three-quarters of a mile north of Montague House and five hundred yards east of Tottenham Court Road'. More recent researchers identify the area as that where Torrington Square is now.