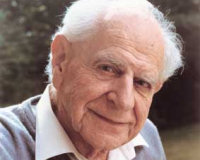 The home of philosopher Karl Popper during the war.

Description: This is where philosopher Karl Popper (1902-1994) lived at a time when his reputation was in the ascent between 1946 and 1950 he lectured to great acclaim and was appointed a Professor at the London School of Economics.

Karl Raimund Popper was born in Vienna in 1902 to a family of Jewish descent. Popper was deeply affected by the political and economic turmoil that struck his home city in the immediate aftermath of the First World War, and for a short spell, the youthful Popper embraced Marxism, an ideology he later came to abhor.

In 1935, Popper was invited to lecture in England on first airing, his ideas provoked considerable bemusement, but importantly, he made numerous important contacts, including Bertrand Russell, A. J. Ayer, and Isaiah Berlin.

In 1946, Popper returned to England to take up an appointment at the London School of Economics where he became Professor of Logic and Scientific Method in 1949, in which year he became a British citizen.

Popper was knighted in 1965 and made a Companion of Honour in 1982. He retired from the LSE in 1969, although he remained an active scholar until the last. He died in 1994 in the Mayday Hospital in Thornton Heath.