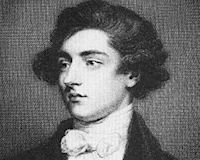 Description: This is where the English novelist, art critic, travel writer, politician and ambitious dandy William Beckford was born.

At the age of ten, he inherited a large fortune from his father, a former Lord Mayor of the City of London, William Beckford consisting of 1 million in cash, land at Fonthill in Wiltshire, and several sugar plantations in Jamaica.

This allowed him to indulge his interest in art and architecture, as well as writing - he wrote the impressive novel Vathek. His architecture led to him masterminding the ill-fated build of the incredible gothic folly Fonthill Abbey.

He was trained by Wolfgang Amadeus Mozart in music.