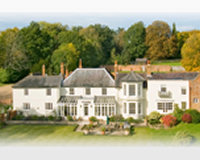 Former recording studio of choice to the stars.

Description: Robbie Williams recorded there, as did Status Quo and the Smiths. But now Ridgeway House, on the Surrey/Hampshire border, is up for sale.

The seven-bedroom house, a mile from Farnham, has gone onto the market in 2009 for 3.5m.

Sadly, the recording studio Jacobs Studios Limited has been demolished, but the property does have an outdoor pool, games room and large cellar perfect for hosting rocknroll parties.

Amongst the most famous recording artists were Robbie Williams including Heaven From Here, Status Quo recorded some of their album In The Army Now, almost simultaneously with Morrissey and Johnny Marr of The Smiths, who were incumbent here during the winter of 1985/6 whilst recording The Queen Is Dead apparently Johnny Marr tried to steal the master tapes in the early hours of one January morning.

A drunken Rick Parfitt of Status Quo once tumbled into the wrong studio by mistake and (briefly) sat in on a Smiths session!

Joe Jackson was here part-recording Night Music in 1994. In 1999, Peter Green (ex-Fleetwood Mac) was here with his Splinter group and in December 2000, Suede were here recording one song for a Swedish film soundtrack.

The Damned were here in around 1981 and, upon arrival were straight off to the local pub(s), returning late and being rowdy to the extent of breaking a studio window with a thrown orange, so were asked to leave the next morning before even playing or recording a single note!

A Colosseum in Watford», 36.km