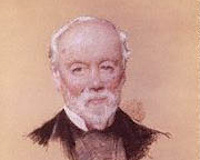 Author of the first ever Self Help book Sam Smiles lived here.

Description: Samuel Smiles, noted author of the first ever Self Help book, called funnily Self Help, lived here. The writer and social reformer, lived at number 4 from 1876 to 1881 and then he moved to No. 8 until his death in 1904.

The eldest of 11 children, Sam was born on 23rd December, 1812, his parents ran a small general store in Haddington in Scotland.

Smiles went to Edinburgh University in 1829 to study medicine, and became involved in the campaign for parliamentary reform. He graduated in 1832 and found work as a doctor in Haddington.

In 1837 Samuel Smiles began contributing articles on parliamentary reform for theLeeds Times. The following year he was invited to become the newspaper's editor. Smiles decided to abandon his career as a doctor and to become a full-time worker for the cause of political change.

In the 1850s Samuel Smiles completely abandoned his interest in parliamentary reform. Smiles now argued that self-help provided the best route to success. His book Self-Help, which preached industry, thrift and self-improvement was published in 1859.