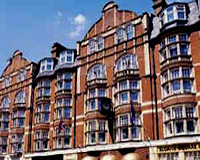 Description: This hotel used to be called The Royal Court Hotel. Now it has 102 air conditioned rooms come full of gadgets with laptop, PlayStation, and DVD player in each.

The Beatles stayed here in 1962 prior to their first national TV show appearance Thank Your Lucky Stars with Janice Nichols.

After the show Jane Asher met The Beatles here, and especially Paul, with whom she spent many hours in conversation. A short time later they began dating, and by year's end, 1963, Paul had moved into a room at the Asher's house on Wimpole Street.

The Beatles later had a photographic session with Cyrus Andrews here as well - 10th Feb 1963.

1» This is where comedy legend Ronnie Barker proposed to his future wife in 1957, in the restaurant at the Royal Court Theatre. (Gilbert James)
Posted by Gilbert James on 2011-09-28

Lost in the Supermarket», 1.2km