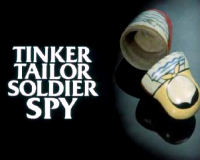 This is where Le Carre's Tinker Tailor Soldier Spy lived.

The spy novel, first published in 1974, is the first volume of a trilogy informally known as The Karla Trilogy.

In the novel, George Smiley, the old, estranged, overweight, taciturn and sharp-minded protagonist, is recalled from his uneasy retirement when there are signs that one of the top-ranking officers of the British Secret Intelligence Service (referred to throughout as The Circus) is a Soviet mole.

And if Ann wanted to return, well, he would show her the door. Or not show her the door according to, well, how much she wanted to return. Consoled by these visions Smiley arrived at the King's Road, where he paused on the pavement as if waiting to cross. To either side, festive boutiques. Before him, his own Bywater Street, a cul-de-sac exactly one hundred and seventeen of his own paces long. When he had first come to live here these Georgian cottages had a modest, down-at-heel charm, with young couples making do on fifteen pounds
a week and a tax-free lodger hidden in the basement. Now steel screens protected their lower windows and for each house three cars jammed the kerb. From long habit Smiley passed these in review, checking which were familiar, which were not; of the unfamiliar, which had aerials and extra mirrors, which were the closed vans that watchers like. Partly he did this as a test of memory, a private Kim's game to preserve his mind from the atrophy of retirement, just as on other days he learnt the names of the shops along his bus route to the British Museum; just as he knew how many stairs there were to each flight of his own house and which way each of the twelve doors opened.

But Smiley had a second reason which was fear, the secret fear that follows every professional to his grave. Namely, that one day, out of a past so complex that he himself could not remember all the enemies he might have made, one of them would find him and demand the reckoning.

At the bottom of the street a neighbour was exercising her dog; seeing him, she
lifted her head to say something but he ignored her, knowing it would be about
Ann. He crossed the road. His house was in darkness, the curtains were as he had
left them. He climbed the six steps to the front door. Since Ann's departure,
his cleaning woman had also left: no one but Ann had a key. There were two
locks, a Banham deadlock and a Chubb Pipekey, and two splinters of his own
manufacture, splits of oak each the size of a thumbnail, wedged into the lintel
above and below the Banham. They were a hangover from his days in the field.
Recently, without knowing why, he had started using them again; perhaps he
didn't want her to take him by surprise.

With the tips of his fingers he
discovered each in turn. The routine over, he unlocked the door, pushed it open and felt the midday mail slithering over the carpet.