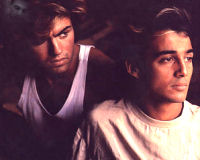 This is where George Michael and Andrew Ridgeley formed Wham!

Description: Famous pupils of this school include George Michael and Andrew Ridgeley, who went on to form Wham! - along with backing singer Shirlie Holliman (later of Pepsi and Shirlie).

Andrew Ridgeley's mum was at one point deputy head teacher at the Junior School.

Parts of the later series of Grange Hill were filmed here, as was comedy film Roll Over Beethoven starring Nigel Planer and Buddy with Roger Daltry.