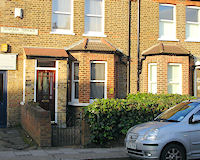 This is where Kinks legend Ray Davies was born.

Description: This is where Kinks founders Dave and Ray Davies were born in Muswell Hill, North London. Ray grew up here as the seventh of eight children born to Fred and Annie Davies.

He, his 6 sisters and brother Dave, all went to nearby William Grimshaw Secondary Modern School (now called Fortismere School).

Their first gig was across the road at The Clissold Arms.

Libertines Up the Bracket Video», 5.7km