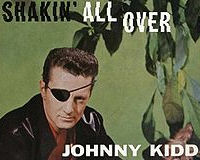 This is where pirate rocker Johnny Kidd grew up.

Description: Johnny Kidd (23 December 1935 7 October 1966) was the singer and songwriter with rock 'n roll band Johnny Kidd and the Pirates. They were one of the few pre-Beatles British rockers to gain worldwide success.

Johnny Kidd was born as Frederick Albert Heath here in 1935.

Their biggest hit was British Number 1 Shakin' All Over in 1960.

Kidd died at age 30 in 1966, in a motor car accident on the A58 in Lancashire. He was cremated at Golders Green Crematorium, London.

Libertines Up the Bracket Video», 8.3km

The Beatles and Charlotte Mews», 5.2km