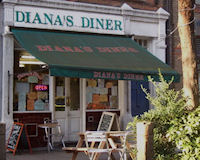 The cheap n cheerful cafe where The Beloved were formed.

Description: On leafy Endell Street there's this cute and homely row of shops and eateries off the beaten track for Covent Garden visitors. Diana's has been here since the 1970's when Australian Diana owned it with her husband.

It's a classic greasy spoon cafe with no frills but classic dishes done well. It's a popular celeb haunt, Supergrass have been here, as have many more.

The founder of The Beloved, Jon Marsh, put an advert in the music press in 1983 asking Should you too wish to do something gorgeous, meet me in exactly three years' time at exactly 11am in Diana's Diner.

The band formed after the meeting in 1986 and went on to have the huge dance hit The Sun Rising and Your Love Takes Me Higher.

What no dodgy warehouse», 3.2km