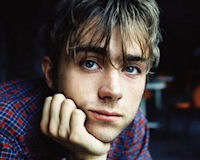 The house where Damon Albarn grew up in East London.

Description: This is where Blur singer and award-winning musician Damon Albarn grew up with his artistic parents, sister and extended family.

In 2014 Damon Albarn released his first solo album after 25 years in the music business. Called Everyday Robotsit included songs based on memories of his childhood in Leytonstone.