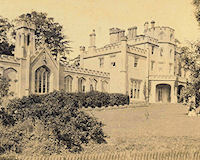 Description: This palatial gothic mansion on the Northern outskirts of London dates back to 1798-99, when it was built by architect Jeffry Wyatt for Hon. George Villiers.

The gardens contain a good-sized reservoir built by French prisoners of war in the 1790s.

Borehamwood Studios is only 3 miles away and is perfectly located to be used in several TV series and films, including Stanley Kubrick's 1962 picture Lolita when it served as Peter Sellers's Pavor Manor.

It also featured in George Pollock's 1963 film Murder at the Gallop.

It can also be seen in the 1969-70 Randall and Hopkirk (Deceased) episode For the Girl Who Has Everything when it was occupied by Lois Maxwell.

An Architect to the Royals», 12.km