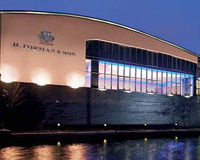 Britain's oldest Salmon curers are based in the East End.

Description: H. Forman and Son are Britain's oldest salmon curers, hailing back to when Harry Forman arrived back from Russia and began importing barrels on Salmon from the Baltic.

Before long Scottish salmon came to his attention and Harry developed a cure that complemented its unrivalled flavour - London Cure was born.

It's a family firm still and they remain faithful to the principles they established in 1905 the freshest salmon, a little salt, just the right amount of oak smoke.