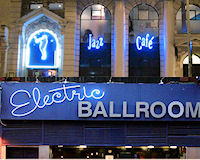 The legendary music venue in Camden.

Description: The Ballroom began as a busy Irish club playing host to a wide variety of performers including the likes of Jim Reeves. Prior to that it was reputedly a masonic lodge with steam bath and swimming pool.


A Distinctive Tune in Tooting», 7.7km