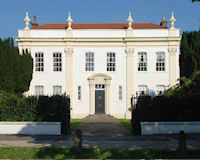 This was once called The Naked Beauty, a striking house.

Description: Hurst House was once described by the architectural historian Nikolas Pevsner as 'the best house of Woodford'. It on the old A11 close to the Winston Churchill statue on the green.

Built in 1714, this striking landmark building, which opens occassionaly for tours, is one of the few survivors of the many villas and mansions built along Woodford Row in the 18th Century.

The house was repaired after a fire in 1936 but retains many of its original features.