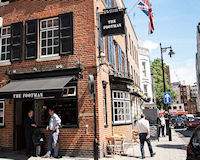 A classy boozer with history of the death of a trade.

Description: This newly renovated pub is one of the oldest in London, dating back to 1749 when it started as The Running Horse frequented by the footmen who were in service to the households of Mayfair.

They would run ahead of their master's coaches, paying any advance tolls and clearing safe passage ahead from people, barrows, animals, etc., usually with a sturdy stick.

However, as footmen were threatened with extinction, one of the last bought it and named it after himself - The Only Running Footman.

In the 1950's it became famous for its sign, which used to read, in full, I am the only Running Footman - the longest pub name in London. Sadly, after a recent refurb it has been shortened and subsequently lost its title.

Today, The Footman remains a hostelry over three floors including dining room.

The Builders Arms and Tunnel», 1.6km