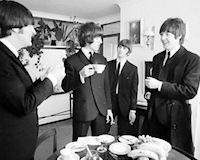 Description: This is where Beatles Legends' George Harrison and Ringo Starr lived in the midst of Beatlemania in early 1964. They partied here and George's future wife Pattie Boyd, also lived there while Brian Epstein had a flat above them and probably recommended the block to them.

They were robbed here in 1964 with burglars making off with cufflinks, US souvenirs and cash.

This is also where The Beatles famously met prior to leaving for Buckingham Palace to receive their MBE medals from the Queen in 1965. After receiving them, John Lennon decided he had sold out to the Establishment and returned it.

They moved out in 1965 with George moving to Esher and Ringo heading to Marylebone.