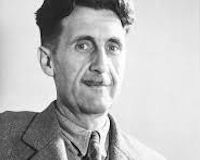 The house that George Orwell saved his Animal Farm manuscript.

Description: This is where author George Orwell's house was before it was destroyed in June 1944 by a German V-1 flying bomb. Orwell, his wife Eileen and adopted baby Richard lived at 10a Mortimer Crescent. Fortunately, the family was not at home.

Armed with a wheelbarrow and a shovel Orwell returned to the bomb site to dig his manuscript of Animal Farm out of the ruins. He wrote to T.S.Eliot This MS has been blitzed which accounts for my delay in delivering it and its slightly crumpled condition, but it is not damaged in any way.

In 2012 a green plaque from The Historic Kilburn Plaque Scheme was unveiled by Richard Blair, Orwell's son on Kington House, a block of 1950s flats which were built on the original bomb site.