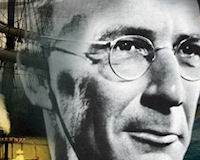 This is where Horatio Hornblower author CS Forester lived.

While living in Washington DC in 1942, he met a young British intelligence officer named Roald Dahl, whose experiences in the RAF he had heard about, and encouraged him to write about them. According to Dahl's autobiography 'Lucky Break', Forester asked Dahl about his experiences as a fighter pilot prompting Dahl to to write his first story, 'A Piece of Cake'.