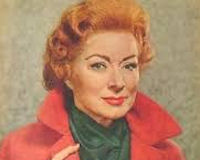 This is where Oscar-winning actress Greer Garson was born.

She went to King's College London earning degrees in French and 18th century literature, she also at some point attended the University of Grenoble in France. She initially worked with an advertising agency, and appeared in local theatrical productions and in January 1932 made her stage debut at the Birmingham Repertory Theatre.

She appeared in the first Shakespeare play performed on television; a live thirty-minute production of an excerpt of Twelfth Night in May 1937 with Dorothy Black. Louis B. Mayer signed Garson to MGM in late 1937 while visiting London, but did not begin work on her first film, Goodbye, Mr. Chips, until late 1938. She received her first Oscar nomination for it, but she received critical acclaim the next year for her role as Elizabeth Bennet in Pride and Prejudice.

Garson won the Academy Award for Best Actress in 1942 for her role as a strong British wife and mother in the middle of World War II in Mrs. Miniver. Guinness Book of World Records credits her with the longest Oscar acceptance speech at five minutes and 30 seconds.

On the 11th April 1951 she became an American citizen and died from heart failure at Presbyterian Hospital in Dallas on 6 April 1996 at the age of 91.