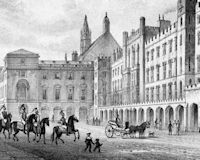 The ancient site for numerous executions.

Description: Old Palace Yard is a paved open space, inbetween the Palace of Westminster and Westminster Abbey, infamous for being the site of many execution of notables.

It is known as the site of execution of Sir Walter Raleigh, Guy Fawkes (and other conspirators of the Gunpowder Plot), and James Hamilton, the 1st Duke of Hamilton (after the Battle of Preston). Sir Walter Raleigh's head was embalmed and presented to his wife who kept it for over twenty years in a glass case until she died!

The western part of Old Palace Yard is freely accessible to the public, while the Eastern end of the Yard is restricted by concrete barriers for security reasons, and is used as a car park for the House of Lords.

For the golden jubilee in 2002 an analemmatic sundial was commissioned by Parliament and was installed into the paving. Visitors should stand (on a sunny day) facing north and step to the line in the center closest to that day's date which is defined by the analemma.

There's also a quote from William Shakespeare's King Henry the Sixth within it To carve out dials, quaintly, point by point, Thereby to see the minutes, how they run-- How many makes the hour full complete, How many hours brings about the day, How many days will finish up the year, How many years a mortal man may live.

The grand Georgian building at 67 Old Palace Yard is a reminder that once the square was residential on all four sides. Indeed, Guy Fawkes and his confederates rented one of the houses that ran across the centre of the Yard. They first began to tunnel through to the House of Lords, until they found it easier to hire a cellar under the House itself.

The statue of Richard the Lionheart by Baron Marochetti now stands in the Yard. A model of the statue was first shown at the Great Exhibition in Hyde Park in 1851, and various noblemen subscribed 3,000 to have it cast in bronze and presented to the nation. 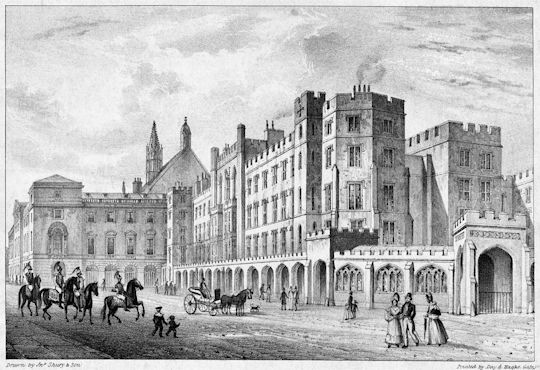