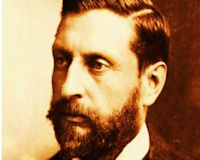 The place where King Solomon's Mines was written.

Description: This is where Sir Henry Rider Haggard KBE (18561925), also known as H. Rider Haggard, lived from mid-1885 to April 1888. He was author of romantic adventure novels set in exotic locations, predominantly Africa, and a leading pioneer of the 'Lost World' literary genre.

It was here in Hammersmith that he completed his most famous novel King Solomon's Mines (published in September 1885). It is true that he accepted a 10% royalty rather than 100 for the copyright.

Haggard was a member of the Athenaeum, Savile, and Authors' clubs and was made a Knight Bachelor in 1912 and a Knight Commander of the Order of the British Empire in 1919.