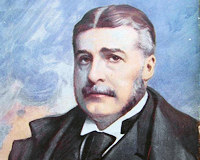 The birthplace of Sir Arthur Sullivan

Description: Victorian musical legend Sir Arthur Sullivan, was born here in Lambeth to parents, Thomas and Maria. Incredibly, they spent their honeymoon in 1838 here as the proud first tenants of the brand new Number 8 Bolwell Terrace.

On the 13th May 1842, their second child, Arthur Sullivan was born here, and christened in the church of St Mary-at-Lambeth.

Sullivan is famed for his comic operas and as the composer in the hugely successful Gilbert and Sullivan partnership. He also wrote The Lost Chord and the hymn Onward Christian Soldiers. He is popularly credited with reinventing popular music by end of the 19th century.

He used to tell a story that he could find always his way home after a heavy night's entertainment on the town by kicking the metal foot scrapers (on the railings at each house's gate) before exclaiming 'Thats It! E-Flat!' and he's found his house!

The grand terrace survived until its demolition in the 1970's, and was famous for having a very early plaque - erected in July 1901 by the Incorporated Society of Musicians. It said:


Comedian Spike Milligan campaigned to save the house and partially successful, the front door of 8 Bolwell Terrace is nicely preserved in the Museum of London. The plaque is long lost sadly.

Sullivan died in 1900 and was buried in St Paul's cathedral by command of Queen Victoria.