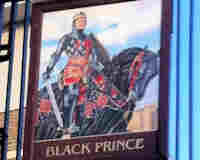 The pub where Kingsman fight scene was filmed.

Description: The current building at Number 6 dates to the early 20th century.

The name refers to the road, which was named after a former lord of the manor. In 1337 Edward III granted the manors of Kennington and Vauxhall and a meadow in Lambeth and Newington to Edward, Earl of Chester and Duke of Cornwall, commonly known as the Black Prince.

The father of Victorian royal magician Evanion (Henry Evans) ran the pub in the 1850's, and as a young man he performed here and very nearly set fire to the building and the pigeons which his father kept there.

The Black Prince Pub featured the infamous fight scene in film Kingsman where Eggsy and his friends drink.