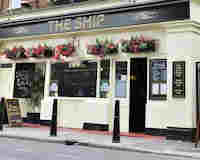 The pub Brunel probably frequented in the 1850's.

Description: The Ship Inn was built in 1835, probably by two houses being sandwiched together and merged into a pub - great idea! Amazingly, it survives in Canary Wharf until present day.

The Great Eastern steam ship was built and launched by Isambard Kingdom Brunel next door at Burrells Wharf in 1858 and the man himself will probably have frequented The Ship during it's build.