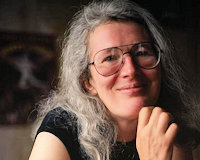 Author of The Bloody Chamber lived and wrote here.

Description: British novelist Angela Carter (1940-1992) published her most famous works, The Bloody Chamber (1979), Nights at the Circus (1984) and Wise Children (1991), while living here in this house. Her work has notably influenced writers such as Terry Pratchett, Sarah Waters and Jeanette Winterson.

In 1991 the Women's Prize for Fiction was set up in response to Carter's final novel, Wise Children, being omitted from the all-male shortlist for the Booker Prize.

Carter moved into this house with her new partner Mark Pearce in the summer of 1976. She had bought the house earlier that year with her friend Christine Downton. Carter took the top two floors and Downton the bottom two and garden, until Carter bought out Downton's share in 1980.

It was at the kitchen table here that Carter wrote the script with Neil Jordan for The Company of Wolves, a film adaptation of her short story of the same name.