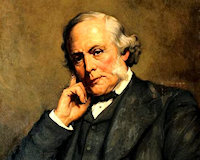 Description: This great location was where the great pioneer of antiseptic medicine Lord Joseph Lister (1827-1912) was living at the end of his life.

Lister's great breakthrough was when he applied carbolic acid to his surgical equipment in an attempt to prevent infection. He got the idea from studying Louis Pasteur's work on microorganisms.

Lister studied at UCL and later at King's College, London. He was also a member of the House of Lords, and President of the Royal Society (1895-1900).

The discovery of Penicillin», 1.2km