The home of Lucien Pissarro 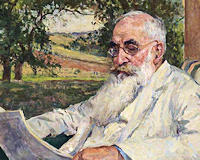 Description: The French-born artist and engraver Lucien Pissarro bought this five-bedroom Grade II-listed house in 1902 to be close to his daughter, and immediately took up painting again for the first time since moving to England permanently in 1890 to study the work of William Morris and the Arts and Crafts movement.

Pissarro became a lecturer at the Art Workers Guild, and also created one of his most important pieces here in this house 'The Brook, Sunny Weather'.

Pissaro was the son of notable French impressionist painter Camille Pissarro, and in Paris worked with contemporaries such as Paul Signac and Vincent Van Gogh, with whom he became close friends. Van Gogh dedicated his 1887 painting, Basket of Apples, to Pissarro. His works were exhibited continuously at the Royal Academy from 1934 until his death in 1944.

Dating from 1760, the house was one of four country homes here that overlooked Stamford Brook, a tributary of the River Thames.

Art with a Global Perspective», 7.2km

The Courtauld Institute of Art», 5.5km