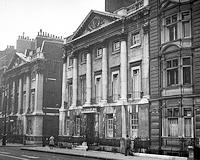 Description: George Edmund Street (18241881) was born in Woodford, and was a prominent driver of the High Victorian style of architecture.

In 1844, aged twenty, he joined the office of George Gilbert Scott, with fellow assistants George Frederick Bodley and William White.

In 1847 he was commissioned to design a new church at Biscovey in Cornwall, quickly followed by other Cornwall commissions enabling him to set up his own office in London in 1849.

In 1850 Street travelled through France; and in the following year and again in 1854 he toured northern Germany and published in 'The Ecclesiologist'. In 1855 he published the hugely influential 'Brick and Marble in the Middle Ages: Notes of a Tour in the North of Italy', based on his extensive tour there in 1853.

In 1856 Street returned to London and was appointed architect for the Crimea church in Constantinople, followed by commissions for churches from Paris, Vevey, Lausanne, Genoa and Rome.

In 1866 he was appointed architect for the Royal Courts of Justice in London.

Street was elected an associate of the Royal Academy in 1866 and became a full member in 1871. In 1874 he was awarded the gold medal of the Royal Institute of British Architects (RIBA).

In 1881, he served both as president of RIBA and as professor of architecture at the Royal Academy. However, he died later this year, on the 18th December 1881, after suffering two strokes, at just 57 years old.

He was buried on 29th December in Westminster Abbey.