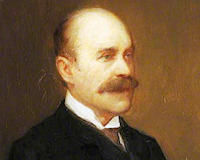 The home of scholar Walter Pater.

His book Studies in the History of the Renaissance became a kind of manual for aestheticism; Oscar Wilde read it while at Trinity College, Dublin. Controversial, it insisted on the importance of artistic style over moral content, and Renaissance became by-word for unChristian vice. He removed the 'Conclusion' section for the 1877 edition.

In 1885, after living and working in Oxford for 16 years, and John Ruskin recently resigned from his role as the Slade Professorship of Fine Art at Oxford University, Pater was the strongest candidate but didnt appreciate his peers lack of support.

He withdrew and with his recent success of Marius, he moved with his sisters from North Oxford to here where he was to live (outside term-time) until 1893 and where he was to enjoy his status of minor literary celebrity.

A meeting of Literary Minds», 3.7km