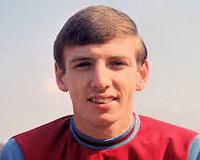 Description: This is the childhood home of West Ham United and England legend Martin Peters.

As a member of the England team which won the 1966 FIFA World Cup, he scored the second of England's four goals in the final against West Germany.

He was born here and lived with his parents in his grandmothers house, a stones throw from the West Ham Speedway Stadium he loved.