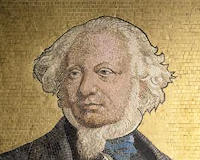 The creator of the first ever Christmas lived here.

Description: The campaigner and educator Henry Cole (1808-1882), the First Director of the Victoria and Albert Museum, lived and died here.

Under the pseudonym Felix Summerly Cole became involved in design-related activities such as the publication of illustrated children's books, sending the first ever Christmas card (designed by JC Horsley in 1846).

In 1846 Cole won a Silver Medal from the Royal Society of Arts for his design of a tea service that was later put into production by Minton.

Cole was also responsible for building up a collection of design that was to form the basis of the collections of the Victoria and Albert Museum.

A Blue Plaque was erected here, on the wall of the Kazakhstan Embassy, by English Heritage in 2001, less than 50m from the V&A!