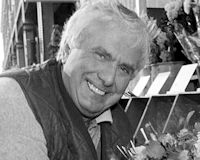 Description: This is where Buster Edwards (born as Ronald Christopher Edwards), was born on 27th January 1931. He was the son of barman Christopher Charles Joseph Edwards, and Mary Elizabeth.

As a career criminal he was involved in the theft of 62,000 from Comet House, the headquarters of British Overseas Airways Corporation at Heathrow Airport, in 1962. Somehow Edwards escaped arrest even though the rest of the gang were caught.

He was a key member of the gang that, in 1963, committed the Great Train Robbery, and was immortalised in the 1980's film by Genesis drummer Phil Collins. He has a cameo in the film when Buster and June land in Mexico, he and wife Jill walk out of the airport in front of Buster and June Edwards!

He left school at fifteen to work in a local sausage factory, where he cashed in on the post-war black market by stealing meat and selling at widely inflated prices. He had also been a boxer, and once owned a nightclub and a flower shop.

Edwards died in Lambeth, London, at the age of 63.