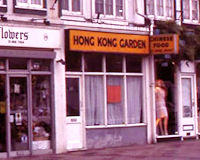 The Chinese inspiration for an early Siouxsie Sioux hit song.

Description: Today it's a Chinese Takeaway called Noble House and back in 1978 it was a Chinese called Hong Kong Garden.

Punk legend Siouxsie Sioux was a regular and said of it I'll never forget, there was a Chinese restaurant in Chislehurst called the Hong Kong Garden. Me and my friend were really upset that we used to go there and like, occasionally when the skinheads would turn up it would really turn really ugly. These gits would just go in en masse and just terrorise these Chinese people who were working there. We'd try and say 'Leave them alone', you know. It was a kind of tribute.

I remember wishing that I could be like Emma Peel from The Avengers and kick all the skinheads' heads in, because they used to mercilessly torment these people for being foreigners. It made me feel so helpless, hopeless and ill.

A Market going down in History», 13.km