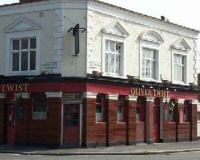 The scene of the start of murderer Edgar Edwards downfall.

Description: Featured recently in filming for Londons Burning, but this pub has a notorious past as the boozer where murderer Edgar Edwards courted his victim.

He purported to be buying John Garlands grocery business, discussed here over several pints, and then on viewing the premises near Worcester Villas (no longer visible) he tried to kill him. Mr Garland survived, but when police searched Edwards house they found 3 bodies buried in his back garden, fatal victims of the same scam.

Edwards was tried at the Old Bailey in February 1903 and his defence was one of insanity, of which there seemed to be an abundant history in his family. His plea wasn't accepted and he was found guilty and sentenced to death.

His last remarks to the chaplain on the scaffold, on 3rd March 1903, would seem to suggest that perhaps his plea of insanity should have been accepted by the court. He is recorded as saying, I've been looking forward to this lot..