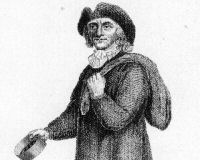 This was where Thomas Britton, father of musical concerts lived.

Description: This was where Thomas Britton, a small-coal man, and the founder of modern concerts worked and lived.

During the day he hawked coal about the streets and in the evening, retiring to his humble abode, and making all as clean and tidy as he could, then he would assemble round him singers and players who could join in a concert.

His voice was so musical, and his taste so good, that his coal-shed concerts
became attractive to persons far above his own station in life. Dr. Pepusch
the musician, the great Handel, Woollaston the painter, Hughes the poet were among the guests; and not unfrequently the beautiful and witty Duchess of Queensberry would enjoy a coal-shedful of beautiful music.

He was nicknamed The Musical Coalman!