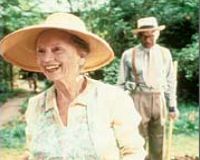 Description: The Hollywood star of Driving Miss Daisy and 23 other films was born here in Hackney in 1909 and a plaque was affixed November 20th 1998.

Jessica trained at RADA and started her professional career at the Birmingham Repertory Company in 1928. She then played in London's West End before going to New York briefly. She then worked in both London and New York including Ophelia to Gielgud's Hamlet in 1934 and in Lawrence Olivier's 1937 Old Vic season. She moved to America full-time during the '40s, and created many landmark roles on the New York stage including that of Blanche Dubois in A Streetcar Named Desire. She worked in London during the filming of Butley (1971) with Alan Bates and during the London run of the Gin Game (1979).

Adam Tandy, her nephew remembers Jessica fondly and said: Many of the family's memories of her in recent years were of family occasions, or during flying visits from her or when our work took us over to America. My brother Gareth was the First Assistant Director on her last film, Camilla.

But it all started here in Hackney. Jessica's mother was theatre-mad and my father often related how she would take her family to a Saturday matinee at the Old Vic to see Sybil Thorndike perform and it was this that tempted her into the world of theatre.

Jessie's oldest brother Michael was inspired to write short playlets for his little brother and sister to perform for various aunts and uncles, and I can therefore relate that Jessica Tandy's earliest recorded triumph was at the age of nine on the very spot that the plaque is to be placed. On Sunday, September 8th, 1918 where she played the lead in A Maiden of Dreams, as Princess Gwendoline of Perania (as pretty as they make 'em). Unfortunately, it is also a matter of record that the play was withdrawn after only one performance!