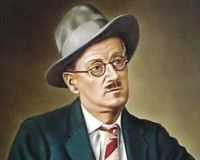 This is where James Joyce lived and called Campden Grave.

Description: Irish author James Joyce and his family moved here in 1931 for what they thought would be an indefinite stay. Tagholm tells us that he had come to England both to be near his ailing father and to marry Nora Barnacle, the tall brunette from Galway, whom he had met in Dublin in 1904.

But theirs was a short stay. Kensingon was too dull for Joyce, who complained that their street was full of mummies and should be renamed 'Campden Grave'. Joyce refers to the relocation from Hotel Belgravia, Grosvenor Gardens, as the fifth hegira.

The reasons given for the relocation were that it would allow Joyce to be near his ailing father and marry Nora in order to avoid legal problems with his inheritance. The ceremony was performed in a London registry office on July of that year.

Campden Grove was situated near St. Mary Abbots, and furniture for the flat was purchased at a department store. Joyce disliked the flat and later rented it to a French Embassy Chef.