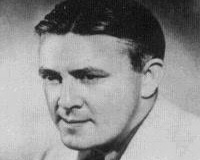 His father was one of the inspirations for Mr Chipping in Goodbye, Mr. Chips, Hilton's most beloved novel Goodbye Mr Chips.


He wrote his two most remembered books, Lost Horizon and Goodbye, Mr. Chips while living here, before he moved to California in 1938 after his divorce from BBC secretary Alice Brown.

James Hilton went on to win an Oscar, an Academy Award in 1942 for his work on the screenplay of Mrs Miniver, based on the novel by Jan Struther.