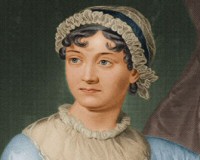 This is where Jane Austen wrote many of her famous letters

Description: 10 Henrietta Street is where author Jane Austen was staying (it was her brothers flat), when that she wrote most of her best letters. These letters have been published by Oxford University Press; the third edition by Deidre Le Faye who works at the British Museum. Actress, Amanda Root, unveiled a green plaque here in 1999 and Jane Austens donkey cart was brought from Chawton.

Jane Austen was born on 16 December 1775 in Hampshire, the 7th of 8 children of a country parson. The Austen children were voracious readers and very fond of reading aloud to each other.

Jane began writing when she was 10 or 11. She was also an excellent dancer, attending local balls in the Town Hall of Basingstoke.

In 1800 the Revd. Austen retired and took his family to Bath. When he died in 1805 Jane and her sister, Cassandra, left Bath to move to her brothers house in Southampton. Here she completed Northanger Abbey and the London publisher, Crosby, paid her 10 outright for the purchase of it. It was not to be printed in her lifetime. In 1809 Janes brother, Edward, gave Jane, their mother and sisters use of a cottage at Chawton.

Jane Austen spent many happy days there, gardening, wine making, writing and sewing patchwork. The book, Sense and Sensibility in 1811 marked a turning point. The book sold well but her name did not appear on it. Jane made a personal profit of 140 from the first edition.

In 1813 came her second book,Pride and Prejudice which was to reprinted within the year and begins with one of the most often quoted first lines in English literature. Sheridan described the book as one of the cleverest he had read. Mark Twain said that when he read it he felt like a bartender who had entered the kingdom of heaven. Mansfield Park, Emma and Persuasion were to follow. Jane Austen wrote letters in the same way others wrote diaries, revealing her perceptive observations and amusing social comment.

She described this flat as 'all dirt and confusion, but in a very interesting way'.