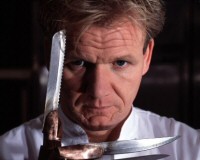 The scene where Gordon Ramsey stole his own reservation book.

Description: Aubergine is the restaurant that Gordon Ramsey got into bother with his former mentor by stealing his own reservation book and blaming it on Marco Pierre White.

It happened in 1998 when a biker rode up and stole the reservation book here, but it only in March 2007 that Ramsey admitted he was behind it.

Ramsey, then head chef, pointed the finger at his mentor turned nemesis Marco Pierre White, who, he believed, wanted to depose him and take over the Michelin starred Chelsea Restaurant.